Home › News › The United Nations is as guilty as Exxon

The United Nations is as guilty as Exxon 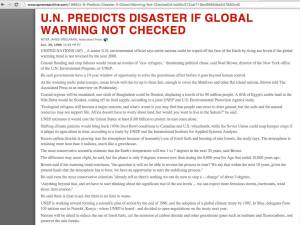 As early as 1989 and probably much sooner the UN new that urgent action on climate change was imperative. They made a conscious decision not to do anything.

“UNITED NATIONS (AP) _ A senior U.N. environmental official says entire nations could be wiped off the face of the Earth by rising sea levels if the global warming trend is not reversed by the year 2000.”

“He said governments have a 10-year window of opportunity to solve the greenhouse effect before it goes beyond human control.”

“As the warming melts polar icecaps, ocean levels will rise by up to three feet, enough to cover the Maldives and other flat island nations, Brown told The Associated Press in an interview on Wednesday.”

“Coastal regions will be inundated; one-sixth of Bangladesh could be flooded, displacing a fourth of its 90 million people. A fifth of Egypt’s arable land in the Nile Delta would be flooded, cutting off its food supply, according to a joint UNEP and U.S. Environmental Protection Agency study.”

″Ecological refugees will become a major concern, and what’s worse is you may find that people can move to drier ground, but the soils and the natural resources may not support life. Africa doesn’t have to worry about land, but would you want to live in the Sahara?″ he said.

“UNEP estimates it would cost the United States at least $100 billion to protect its east coast alone.”

“Shifting climate patterns would bring back 1930s Dust Bowl conditions to Canadian and U.S. wheatlands, while the Soviet Union could reap bumper crops if it adapts its agriculture in time, according to a study by UNEP and the International Institute for Applied Systems Analysis.”

“Excess carbon dioxide is pouring into the atmosphere because of humanity’s use of fossil fuels and burning of rain forests, the study says. The atmosphere is retaining more heat than it radiates, much like a greenhouse.”

“The most conservative scientific estimate that the Earth’s temperature will rise 1 to 7 degrees in the next 30 years, said Brown.”

“The difference may seem slight, he said, but the planet is only 9 degrees warmer now than during the 8,000-year Ice Age that ended 10,000 years ago.”

“Brown said if the warming trend continues, ″the question is will we be able to reverse the process in time? We say that within the next 10 years, given the present loads that the atmosphere has to bear, we have an opportunity to start the stabilizing process.″

“He said even the most conservative scientists ″already tell us there’s nothing we can do now to stop a … change″ of about 3 degrees.”
UN Predicts Disaster of Global Warming Not Checked June 30 1989

These are excerpts from Nick Breeze’s interview with Natalia Shakhova at the European Geophysical Union in Vienna, 2012.

Activist, sailor, passionate about the earth and all it's inhabitants without favour . Brace for imminent impact as we bare witness to the non-linear unraveling of the biosphere and habitability disappearing for most if not all complex life on the only habitable planet we know of. To quote President Niinistö in North Russia: ‘If We Lose the Arctic, We Lose the World’. Folks we have lost the Arctic.

17 comments on “The United Nations is as guilty as Exxon”