The Inevitability of Nuclear War and Subsequent Nuclear Winter

“The long lucky streak can’t go on forever. President Reagan understood this and focused on ending the Cold War. This achievement has been overturned by the evil neocons operating through the last three US presidents.”  click here for additional P.C.R. sourced article Ticking Closer to Nuclear Midnight. 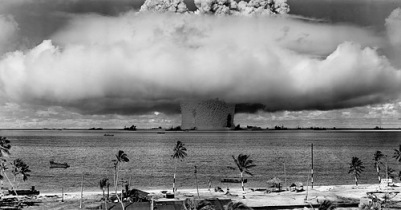 “In a nuclear war, immense nuclear firestorms in burning cities would create millions of tons of thick, black, radioactive smoke. This smoke would rise above cloud level and quickly surround and engulf the entire Earth. The smoke would form a stratospheric smoke layer that would block sunlight from reaching the surface of Earth for a period of about ten years.  Heated smoke in the stratosphere would cause massive destruction of the protective ozone layer. Huge amounts of harmful Ultraviolet light would penetrate the smoke and reach the surface of the Earth.Warming sunlight would be blocked by the smoke layer and cause the Earth to rapidly cool. In a matter of days, Ice Age weather conditions would descend upon all peoples and nations.”

Carl Sagan on the possibility of a nuclear winter

I believe that this will be how they slow down our runaway climate change catastrophe.  The concept of a nuclear orchestrated global dimming and hence cooling is laid out below:  Nuclear War Threatens Human Existence.