Home › Activism › Activism is the rent I pay for occupying space in the most beautiful and complex biosphere we know of.

Activism is the rent I pay for occupying space in the most beautiful and complex biosphere we know of.

I was recently interviewed for an episode of “Moving Forward” by Rob Steimetz where we discussed the reasons why I have been an activist since my youth. Click on the “Moving Forward” link above.

We discussed how I became an ocean sailor, experiences with being in war zones in Ireland and Mozambique and running from rogue elements of the Israeli Defense Force in Kathmandu after I challenged their fascist behaviour.

The main purpose of the interview is to encourage young activists to become involved in social movements, to question everything, including the movements ‘leaders’ and to discover how rewarding it can be personally.

Some of the closest friendships I have formed over the years have been on the front lines of activism. 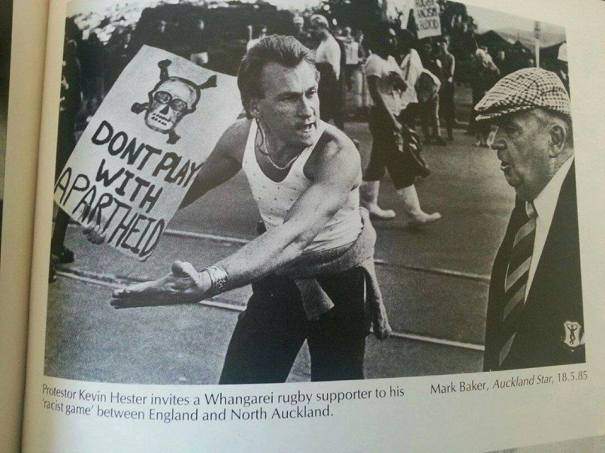 I made a few enemies along the way as you could imagine challenging the nations “religion” Rugby.
In the early 1980’s HART, the New Zealand anti-apartheid organisation received a letter penned by Nelson Mandela in his prison cell on Robin Island where he wrote “You shone a ray of sunshine into a very dark cell”. One of my closest friends Marx Jones was imprisoned for flying a small plane over a game of Rugby at Eden Park when he threw out flour ‘bombs’ and a banner reading “BIKO”  , the You Tube video of the action is embedded here;

I was recently interviewed on national television in New Zealand about a dangerous stand of 100 trees that were poisoned and left standing on a cliff edge adjacent to a busy shipping channel. The article is embedded here

9 comments on “Activism is the rent I pay for occupying space in the most beautiful and complex biosphere we know of.”