Pictures of The Good Ship Woolly Jumper: Anecdotes of Neil Finn and My Life “Colliding” 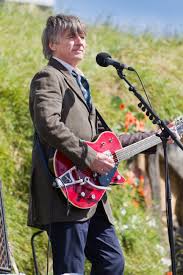 I was asked to submit a story for a upcoming book about the life of Neil Finn which has been accepted.

The Finn brothers and I have been sailing together now for 36 yrs mostly just in spirit but a couple of times, at sea together. We grew up about 50 km’s from each other in central North Island communities, clan Finn in Te Awamutu, clan Hester in Matamata. Word was already spreading about “ Enz”, then Tim’s little brother joined the band and the legend grew. I first saw them play / perform at the Nambassa music festival at Waihi in January 1979 when I was 19, I’ve been seeing red ever since.

We were once at the Finn home in Parnel, Auckland doing some renovations and I was using a reciprocating saw, Neil liked the action and flexibility of the saw and asked if he could help, naturally I said sure. He starts attacking the wall we were demo’ing and was bouncing around on the end of the saw. I didn’t like what I ‘saw’ and took it from him saying “ I don’t need the wrath of a nation for being the guy who cut the fingers off our most beloved guitarist”, Neil wasn’t impressed but Sharon waltzed by laughing saying “Good idea”!

Remarkably that day we were all working and the radio started playing some of Neil’s music, we all started cheering and Sharon said what’s going on, I pointed out who was on the radio and she gave me that gorgeous cheeky grin and said “ didn’t notice” !!! lol, you have to admit, she’s made an excellent man of him and their obvious love for each other has given birth to some wonderful love songs and two extraordinary young men, carrying on the legacy.

In over 30 yrs of back packing and sailing to 50 + countries the music of Split Enz, Crowded house and Neil’s solo work have kept me company. In September 2000 I was sailing a yacht to Tonga and stopped at Minerva Reef which is 700mls north of NZ and 350mls south of Tonga. Whilst at the reef, the skipper of another yacht anchored there was attacked by a shark. Being a NZ Coastguard trained first aider, I drew the short straw to treat the victim whilst waiting for the NZ Navy ship Resolution to steam to our position to medevac the victim to Tonga.

We kept him alive for 30 hrs until the handover was complete and we sailed off from Minerva, towards a total lunar eclipse shattered from the experience. We steamed out through the entrance to the reef with “ Shark Attack “ blaring, classic Kiwi gallows humor.. Later that night the eclipse took place and we were lucky enough to have perfectly clear skies, cue “ Always take the weather with you”.

In August 2011 Neil’s tour manager called me and asked if I could organise a boat to get the band to the wharf in down town Auckland. It was suggested that we drop them all on Pier 3 leaving them a 200m walk on a public street to the Shed 7 entrance!! My reaction was you must be joking! Walk the two most famous Kiwi rock stars through a throng of euphoric, inebriated Kiwis enroute to the biggest event held in NZ for a decade, through an estimated 70,000 people?? My suggestion was that we use the adjoining NZ Customs wharf which would be behind security fences and would provide a safe and secure entrance to the gig.

We were told that because it was a secure customs area, access was impossible and we would have to use Pier 3 and make the most of it. The tour manager looked at me with a quizzical look and I replied, “ Sweet, on that basis, I quit. I’m not signing up for the role of the guy who Didn’t get the Finn Brothers to the biggest gig in NZ for a decade”. There was a stunned silence followed by me suggesting they contact the Minister of Customs.

The power of rugby and rock n roll prevailed and we were granted access via the customs wharf with the surreal experience of us all having to bring passports to gain entry into the gig!!!!! I kid you not, HMNZ Customs officers cleared us off the boat after a two mile sail from Westhaven Marina! Kiwi rock royalty? Incidentally there turned out to be between 100,000 and 200,000 people waiting for us, the sailors prudence paid off. Another Finn brothers gig climaxed with the beginning of the competition and NZ defeating Tonga 41-10. Team Finn 1 Her Majesty’s customs nil.

In 2009 Jeff Tweedy, Glenn Kotche, John Stirratt and Pat Sansone of Wilco, Scottish singer-songwriter KT Tunstall, and some other friends of Neil’s put the Seven Worlds Collide team back together and while they were here Neil rang me and mentioned that some of the ‘musos’ and family were keen to get out on the water for a sail.

I cajoled my friends Martin Gillman and Cedric Allan into providing the good ship “Woolly Jumper” for what turned out to be a blast around the harbour. We all met at Westhaven Marina on a blustery 25 knt, gusting 30 knts day. I said to Neil “ It will be a wild ride but the boat is 50ft, has done a Sydney to Hobart and she is up for it if you are?” Neil pointed at the boat and said weigh anchor.

We headed out into the wonderful Hauraki Gulf with the boat on her ear, gunnels in the water, Seven Worlds Collide out on the rail as shown in the attached photo. We ‘hurtled’ around the harbour with everyone having a spell on the wheel, lots of fun was had by all and they were all returned to the marina early in the evening wind – blown but elated. As they disembarked, they all looked like they had been through a washing machine and were now supposed to head to the studio to record. The last thing I said to Neil as they departed in the minivan was “ Sorry mate, I didn’t mean to wear them all out”. Cue laconic grin and the ‘Finnsters’ wink.

I heard from the studio 5 hrs later that they were all ‘going off’, elated by their day on the water, the rest is history .

Last year the NZ government in its infinite lack of wisdom, decided to start deep sea drilling for oil off the coast of NZ even though we all know that we must leave 80% of the existing fossil fuel that has already been discovered in the ground and methane hydrate deposits have been discovered off our coast, methane being 50 to 100 times worse than carbon and was the driver of the Permian extinction, they obviously have an extinction wish that will soon be granted to us all and most other species on the planet .

I was involved with Greenpeace and we organised a protest on the beach at Piha where Sharon and Neil have a ‘bach’, (holiday home) . We had our “ banners on the beach” action and after, I called into the house for a beer and lunch, when Sharon heard what we had been doing she must have let Neil know in New York where he was playing, because when I returned home, I found a post on my Facebook ‘wall’ from an American friend Jeanette Eastman, who has been involved with Neil and his bands ‘fan club’ for many years.

Neil had tweeted his thanks for us getting out on the beaches to stop this lunacy, the amazing power of social media. I have been campaigning against deep sea drilling alongside another of Sharon and Neil’s friends Lucy Lawless, aka “Zena, Warrior Princes” , warrior all right, two years ago she was arrested climbing onto an oil drilling ship in Taranaki and to our amazement arrived at Sharon and Neil’s 20th wedding anniversary 8 months pregnant in a bikini, with her husband Rob Tappert dressed as a cardinal!

The spirit of protest that won N.Z. women the vote first in the world, that made us the first country in the world to declare ourselves “ Nuclear free” continues with the help of these two ecologists as we enter what both the World Wildlife Fund and National Geographic are now calling the 6th great extinction ( 150 to 200 species go extinct now every day).

Two months ago I received a call from Elroy, Sharon and Neil’s son, Liam was getting married and a ‘stag do’ was arranged on the same boat used for the Rugby World Cup, who said ‘History Never Repeats’?

I’ll sign off with “ Always take the Weather with you”.

Tagged with: Anecdotes of Neil Finn and My Life "Colliding"
Posted in Stories, Writings

One comment on “Pictures of The Good Ship Woolly Jumper: Anecdotes of Neil Finn and My Life “Colliding””