Home › Aerosol Masking Effect › Could the Imminent Collapse of the US Dollar Trigger the Collapse of The Global Economy and the Biosphere?

Could the Imminent Collapse of the US Dollar Trigger the Collapse of The Global Economy and the Biosphere?

US Dollar Hegemony is drawing to a long overdue collapse. Could it trigger the collapse of the global economy, trigger the loss of the “Aerosol Masking Effect” and the collapse of the biosphere?
“What do you get when you add up a massive exodus from the US dollar, insane monetary and fiscal policy, record COMEX deliveries, and a wave of institutional funds headed towards the precious metals? Join Mike Maloney in today’s video to find out”.

As we circle the drain, both ecologically and financially and US dollar hegemony collapses because of the debasement of the fiat currency we see the Gold and Silver prices being manipulated.
The run on silver isn’t because of increased industrial demand, it is a flight to tangible assets.

The system is and will be gamed until collapse unfolds and then the debate will be academic.
This is exactly how complex societies collapse. The debasement of the currency contemporaneous with pathological sociopathy and psychopathy at the helm our sinking ship. Andy Schectman: Silver Supply Is Getting Tight Again

“No one seems to be worried about the falling dollar, veteran stockbroker Peter Schiff writes on Twitter, as the US currency continues to slide versus major rivals amid gold and silver record growth.

According to Schiff the ignorance is “likely to remain the case until the fall becomes a crash, which I don’t think will begin until the Dollar Index breaks 80. At its current rate of decline that level could be breached before year end, perhaps by election day.”
Dollar crash will topple the entire US ‘house of cards’ economy by year end – Peter Schiff

” Get ready to understand Quantitative Easing (indiscriminate printing of money by central banks), how the financial system works, who owns your financial system, who lets them get away with it and why, why gold is not necessarily going to come to the rescue like many hope it will, why it’s all about to come crashing down (no exaggeration) and why we’re seeing such extreme social, political and societal shifts at this present time.”

Watch this masterpiece and see how broken the economic system is.

Peter Schiff suggests getting out of any asset denominated in US dollars to mitigate the coming implosion of the Greenback:

Ok, so how does economic collapse trigger the collapse of the biosphere?

My co-host on Nature Bats Last on the Progressive Radio Network, Professor Guy McPherson and I have been warning of the potential consequences of a substantial economic crash or the collapse of industrial civilisation and what the loss of the aerosol masking effect will have on the climate, specifically warming.
It is still being debated how quickly the loss of aerosols will advance global warming. For me following the “Precautionary Principle” is paramount. When 911 happened and three buildings mysteriously collapsed in NY, all aeroplane traffic was grounded and within days the particulates fell out of the sky and their was a near immediate spike in temperatures.
October is the time when most of the major economic crashes take place which is why this latest work from Professor Guy McPherson is so pertinent.
” Although the paper by Rosenfeld and colleagues is ambiguous with respect to planetary warming beyond that forecast by Levy et al., an interview with the lead author of the paper indicates that the paper by Levy and colleagues underestimates by half the impact of the aerosol masking effect (thus, less than a 20% reduction in industrial activity will drive a rapid temperature spike of 1 C). ”
Think about that for a second. A 20% reduction in economic activity triggers a 1C global mean temperature rise. That’s another 40% of all anthropogenic warming so far in days or weeks.
This is why I follow the global economic system so carefully, sadly we are chained to it. Total collapse will be just that.

The graph below shows the spike in temperatures in India as a direct result of the loss of aerosol pollution. 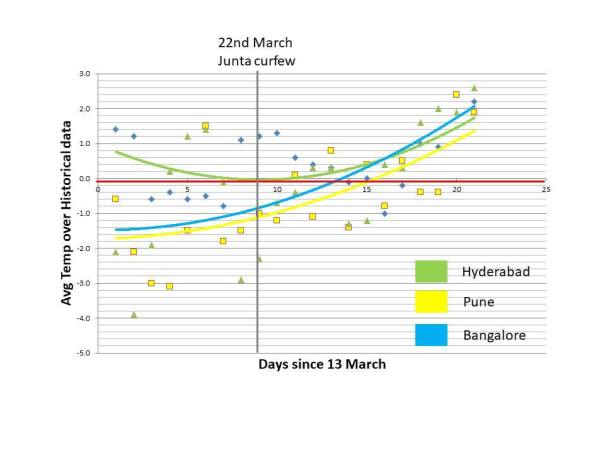 In Hemingway’s 1926 novel “The Sun Also Rises” Bill asked
“How did you go bankrupt?” .
“Two ways,” Mike said. “Gradually and then suddenly.”

This is exactly how civilisations collapse, slowly and then suddenly.

I was in Berlin one week before the Berlin Wall collapsed, which went on to trigger the collapse of the USSR. There was not a single hint that the end was so close. It will be the same with the ‘Empire of Chaos’

The cognitive dissonance around not seeing the obvious signs is amazing to me.

29 comments on “Could the Imminent Collapse of the US Dollar Trigger the Collapse of The Global Economy and the Biosphere?”