As our oceans warm and acidify the danger of a ‘Canfield Ocean’ become more certain by the day.
https://robertscribbler.com/2015/08/28/shades-of-a-canfield-ocean-hydrogen-sulfide-in-oregons-purple-waves/

In this brief presentation from RT we see that the oceans around the Arctic are becoming more acidified, this is a direct consequence of the loss of sea ice.
http://youtu.be/h3MHVqw_bRU

Are we already starting to awaken some of the horrors of the ancient hothouse ocean? Are dangerous, sea and land life killing, strains of primordial hydrogen sulfide producing bacteria starting to show up in the increasingly warm and oxygen-starved waters of the US West Coast? This week’s disturbing new reports of odd-smelling, purple-colored waves appearing along the Oregon coastline are a sign that it may be starting to happen. 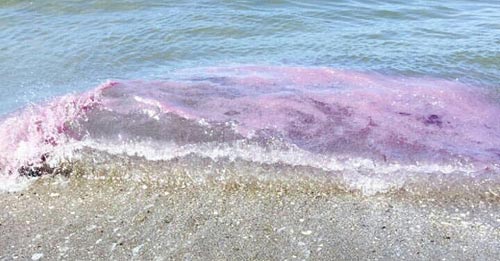 (Purple waves wash over the Oregon beach of Neskowin on August 15. A form of hydrogen sulfide consuming bacteria is known to color water purple. Is this an indicator that the deadly gas is present in Oregon’s waters? Image source: Jeanine Sbisa and Beach Connection.)

Oregon beachgoers and ocean researchers alike are flummoxed. There’s something strange in the water. Something that’s coloring the waves of Oregon’s beaches purple even as the off-shore waters are painted…

37 comments on “Shades of a Canfield Ocean — Hydrogen Sulfide in Oregon’s Purple Waves?”