31st anniversary of the Explosion at Chernobyl Nuclear Power Plant

On the 26th of April 1986, I was walking around Istanbul in Turkey, in open footwear, shorts and a singlet in the spring rain, ( backpacking Kiwi style),when word came through that there had been a massive explosion at the Nuclear Power Plant at Chernobyl. With obscene haste the Turkish Government rallied to inform the populace that their was no radiation hazard in Turkey. Lie number 1, day 1.

Image of nuclear test in the Pacific where Pacific Islanders were unwittingly used as part of a racist, imperialist experiment on the effects of ionising radiation on humans.

Many  of the rural population of Turkey and the rest of Europe collect rain water from their roofs to drink and water their crops/gardens/ livestock. All of that water was contaminated with ionising radiation and because the government lied, almost  no one took Iodine to protect themselves. This was a Europe wide disaster that was massively down-played to;
1) Prevent the justified panic and Grief that would have ensued had people understood the magnitude of the catastrophe.
However more importantly;
2) To protect a Trillion Dollar Armaments  Industry disguised as a power industry. Nuclear power is a byproduct of the nuclear armaments industry and has been used for the production of weapons grade plutonium.
The threat of Nuclear War was covered previously on this blog here;

“One of the consequences of the Chernobyl accident has been an increase in the incidence of thyroid cancers in the exposed population and particularly in children. The European Commission organised the seminar on thyroid diseases in response to a wish of the members of the Group of experts referred to in Article 31 of the Euratom Treaty to discuss in depth this particular aspect of the consequences of the Chernobyl accident.”
Peer reviewed science paper analysis of ionising radiation on the Thyroid Gland embedded here. The same thing has manifest in Japan post Fukushima Daiichi with numerous cases of Thyroid Cancer, especially in young girls. Paper courtesy of the great Australian anti-nuclear campaigner Dr Helen Caldicott is embedded here

Prior to Cop Out 21 in Paris, I was interviewed by Libbe HaLevy the producer of Nuclear Hotseat podcast, where we discussed the opportunism of the Nuclear Industry using our climate crisis to promote their murderous business model. The interview is embedded here;

Now the ‘Good news'(sic). As  a result of Runaway Global Warming, now that we have crossed a multitude of ‘Tipping Points’  ,humans are about to join the very conservative  150/200 other species that go extinct every day as a result of our crack like addiction to carbon. This will spare us the multi-generational genetic destruction that would have been wrought on us humans and all the other biota of the biosphere,had we managed to keep nuking the planet without immolating everything.
Professor Guy McPherson and I toured NZ in 2014 and 2016 discussing runaway abrupt climate change leading to  “Near Term Human Extinction”, most of the 2016 presentations are embedded here . When humans disappear from the irradiated planet we will see 450+ nuclear power station meltdowns and the accompanying 1200 spent fuel pool fires which will be infinitely worse. I recently addressed a group of Community Development Students at Unitec in NZ when I discussed this eventuality. The video is embedded here

On the 11 of March 2011 my second to worst fears concerning the nuclear nightmare our planet has been threatened with since it’s inception manifest, with the triple melt down and melt through of both primary and secondary containment at 3 of the 6 nuclear plants at Fukushima Daiichi. Fukushima Daiichi is never, ever going away.  There are now 3 coriums ( melted cores) that are exposed to the atmosphere and the ground water, spewing ionising radiation into both my beloved Pacific Ocean and the atmosphere above.
My darling mother lost her Thyroid gland as a result of cancer, I believe that her cancer was directly related to atmospheric nuclear testing in the Pacific.

Fellow anti-nuclear campaigner Catherine Gow and myself holding my “Fukushima is Never Going Away” banner outside the Japanese Embassy in Auckland NZ.
Fukushima is never going away, nor is Chernobyl, nor are the 450 nuclear plants that I know of that leak ionising radiation every minute of every day 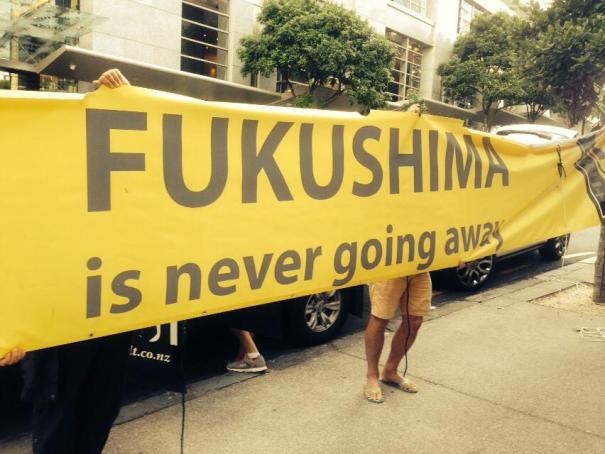