In this months episode of Nature Bats Last on PRN.FM podcast, I was honoured to re-interview Professor Paul Ehrlich on his book “The Annihilation of Nature”,the show is embedded here:
“The numbers are sobering: Over all, there has been a human-driven decline in the populations of all species by 25% over the past 500 years, but not all groups have suffered equally. Up to a third of all species of vertebrates are now considered threatened, as are 45% of most species of invertebrates. Among the vertebrates, amphibians are getting clobbered, with 41% of species in trouble, compared to just 17% of birds—at least so far. The various orders of insects suffer differently too: 35% of Lepidopteran species are in decline (goodbye butterflies), which sounds bad enough, but it’s nothing compared to the similar struggles of nearly 100% of Orthoptera species (crickets, grasshoppers and katydids, look your last).“The Sixth Great Extinction is Underway and We’re to Blame; 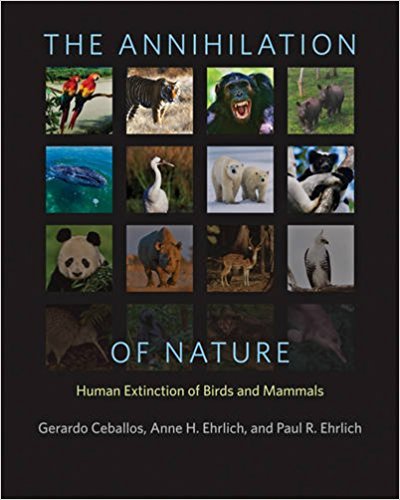 “In this beautiful book, three of today’s most distinguished conservationists tell the stories of the birds and mammals we have lost and those that are now on the road to extinction. These tragic tales, coupled with eighty-three color photographs from the world’s leading nature photographers, display the beauty and biodiversity that humans are squandering.”
For a slide show of the wonderful photo’s and illustrations in this book click on the following link;The Annihilation of Nature

“The oft-repeated claim that Earth’s biota is entering a sixth “mass extinction” depends on clearly demonstrating that current extinction rates are far above the “background” rates prevailing between the five previous mass extinctions. Earlier estimates of extinction rates have been criticized for using assumptions that might overestimate the severity of the extinction crisis. We assess, using extremely conservative assumptions, whether human activities are causing a mass extinction. First, we use a recent estimate of a background rate of 2 mammal extinctions per 10,000 species per 100 years (that is, 2 E/MSY), which is twice as high as widely used previous estimates. We then compare this rate with the current rate of mammal and vertebrate extinctions. The latter is conservatively low because listing a species as extinct requires meeting stringent criteria. Even under our assumptions, which would tend to minimize evidence of an incipient mass extinction, the average rate of vertebrate species loss over the last century is up to 100 times higher than the background rate. Under the 2 E/MSY background rate, the number of species that have gone extinct in the last century would have taken, depending on the vertebrate taxon, between 800 and 10,000 years to disappear.” Accelerated modern human–induced species losses: Entering the sixth mass extinction.

I mentioned in the interview; “The Belt and Road Initiative (BRI) simply blows out of the water anything else that’s been attempted in human history. As currently planned, it will involve some 7,000 separate infrastructure or extractive industry projects scattered across 70-odd nations, with a total price-tag of $8 trillion. It’ll span half the planet — from Asia to Africa, Europe and the South Pacific.”
It’s hard for me to think where the sand, let alone the energy for this project will come from,considering to all intents and purposes we have consumed the planets ‘construction sand’ already.China’s Global Infrastructure Initative Could Bring Environmental Catastrophe
Also mentioned was this quote from Joanna Macy:
“Because of social taboos, despair at the state of our world and fear for our future are rarely acknowledged. The suppression of despair, like that of any deep recurring response, contributes to the numbing of the psyche”. The Greatest Danger;

On a similar theme this great You Tube presentation from PaulBeckwith.net ” Human Decimation of Earths Creatures:”
I’ve embedded below another important discussion between Professors Paul Ehrlich and Guy McPherson titled: A Conversation with Paul Ehrlich

137 comments on “Professor Paul Ehrlich: “The Annihilation of Nature”.”