Home › Abrupt Climate Change › Welcome to the 2020’s, the Final Decade of the Failed Human Experiment

Welcome to the 2020’s, the Final Decade of the Failed Human Experiment

The late great Albert Bartlett in his seminal presentation titled ; The Exponential Function said “One of the greatest shortcomings of the human race is our inability to understand the exponential function”. Most people know the expression but don’t truly grasp it’s full implications. The “Feedback Loops” that the large NGO’s used to warn of,  have now arrived en-masse, the silence from them on this topic is deafening. 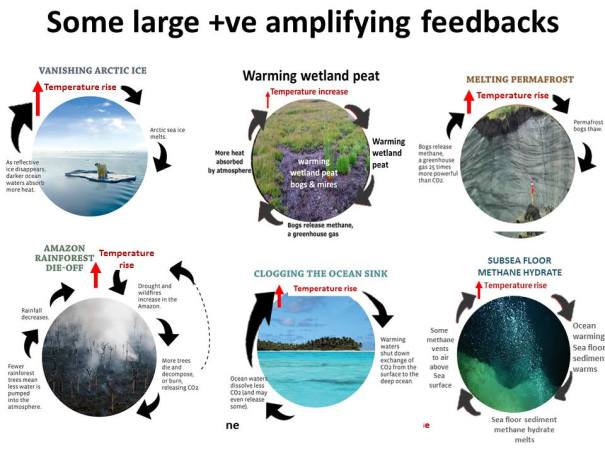 We are now in the non-linear stage of the unraveling of the biosphere and we are witnessing cascading events that are and will domino across the entire biosphere at an ever accelerating rate. I will list below, with numerous corroborating evidence embedded, why I believe this is our last decade on this beleaguered planet. Personally I shall be very surprised if we are still here in 36 months after another three melt seasons in the Arctic and Antarctic. Having considerably less time than that is entirely plausible!

Previously I have written on this blog about the consequences of the loss of Arctic Sea Ice; “Losing the remaining Arctic sea ice and its ability to reflect incoming solar energy back to space would be equivalent to adding one trillion tons of CO2 to the atmosphere, on top of the 2.4 trillion tons emitted since the Industrial Age, according to current and former researchers from Scripps Institution of Oceanography at the University of California San Diego.”
“At current rates, this roughly equates to 25 years of global CO2 emissions.” Cascading Consequences of the Loss of Arctic Sea Ice
It is entirely feasible that we will have entered that uncharted territory on or before the end of the 2020 melt season in the Arctic, assuming the melt season still has an end and the long predicted burst of methane from the East Siberian Arctic Shelf hasn’t already been ejaculated into the atmosphere!
President Niinistö in North Russia: ‘If We Lose the Arctic, We Lose the World’

All of the above information covers just 1 of 6 dozen feedback loops documented in this ‘Piece de Resistance’ Climate-Change Summary and Update
“New research shows that the loss of biodiversity can increase the risk of “extinction cascades,” where an initial species loss leads to a domino effect of further extinctions.The researchers, from the University of Exeter, showed there is a higher risk of extinction cascades when other species are not present to fill the “gap” created by the loss of a species. Even if the loss of one species does not directly cause knock-on extinctions, the study shows that this leads to simpler ecological communities that are at greater risk of “run-away extinction cascades” with the potential loss of many species.” The full peer reviewed paper is embedded here; Biodiversity loss raises risk of ‘extinction cascades’

The official UN statistic in 2010, which will be terribly conservative, states that we lose 150 to 200 species every day. Naturally it has accelerated in the subsequent 10 years. It stands to reason that sooner or later we will hit the point where the loss of keystone species will trigger the final cascade of extinctions. “What we are seeing today is a total disaster,” said Ahmed Djoghlaf, the secretary-general of the UN Convention on Biological Diversity. “No country has met its targets to protect nature. We are losing biodiversity at an unprecedented rate. If current levels [of destruction] go on we will reach a tipping point very soon.” Protect nature for world economic security, warns UN biodiversity chief

This presentation on collapse is equally prescient;
Why Everything Will Collapse
On the October episode of Nature Bats Last on the Progressive Radio Network my co-host Professor Guy McPherson and I interviewed Robert Hunziker about the great unraveling we are all witnessing and are a part of.
In this subsequent article Robert discusses the inevitably of bio-sphere collapse! (How weird it is for me to write those words !!!!!! )
In next months episode we will re-interview Stephen Jenkinson sometimes known as “The Grief Walker” when we will continue our mission to have the conversations most shy away from.
I’ve embedded the interview with Robert Hunziker titled  Biosphere Collapse? and a previous interview with Stephen Jenkinson can be found at the Nature Bats Last archive at PRN.FM
“Nothing will remain on earth, or under the earth or in the waters which will not be persecuted, disturbed and spoiled, and those of one country removed into another. And their bodies will become the sepulture and means of transit of all they have killed.~” Leonardo da Vinci
From the essay titled Abrupt, Irreversible Climate Change

Anyone paying attention would have seen the fires burning since the beginning of the Australian spring.  Over 12 million acres of forests and wilderness have burned. All of the sequestered carbon has been released and the former carbon sinks no longer exists, nor will the overhead ‘Sky Rivers’ ever return, these are classic feedback loops. If you think the drought was bad before these fires you aint seen nothing yet. “Australia has been ravaged by fires since September. About 12.35 million acres have burned nationwide”. Thousands of koalas feared dead in wildfire-ravaged area north of Sydney

A quick search will tell you that a handful of Firefighters and a few other people have perished. The true mortality count is nearly half a billion earthling fatalities in Australia’s fires alone.
“Ecologists at the University of Sydney estimate around 480 million mammals, birds and reptiles have been killed, directly or indirectly, by the devastating blazes since they began in September”.Nearly 500 million animals killed in Australian bushfires, experts fear. Because we rarely count the non-human death toll we all underestimate the slaughter already underway.

This long drawn out collapse has been going on for a very long time, the collapse itself will be sudden and brutal. Make the most of every day, time is much shorter than most realise.
The temperature is rising, the grim reaper beckons; 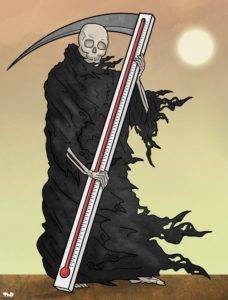 To get the most from this article I urge the reader to invest time in checking out the embedded links because it is imperative in connecting the dots in such a complex system. That complexity is at the crux of my contention that time is infinitely shorter than most would realise.

25 comments on “Welcome to the 2020’s, the Final Decade of the Failed Human Experiment”