The Event Horizon; Homo Prometheus and the Climate Catastrophe

The December episode of Nature Bats Last which featured an interview with Dr Andrew Glikson from the Australian National University is embedded here.

We discussed the potential for the Arctic marine food web to collapse, more details on that aspect of this catastrophe are embedded here; Witnessing ice habitat collapse in the Arctic

“Algae that live in and under the sea ice play a much greater role for the Arctic food web than previously assumed. In a new study, biologists of the Alfred Wegener Institute, Helmholtz Centre for Polar and Marine Research showed that not only animals that live directly under the ice thrive on carbon produced by so-called ice algae. Even species that mostly live at greater depth depend to a large extent on carbon from these algae. This also means that the decline of the Arctic sea ice may have far-reaching consequences for the entire food web of the Arctic Ocean. Their results have been published online now in the journal Limnology & Oceanography.”
“We now know that ice algae play a much more important role for the pelagic food web than previously assumed. This finding also means, however, that the decline of the ice could have a more profound impact on Arctic marine animals, including fish, seals and ultimately also polar bears, than hitherto suspected,” says Doreen Kohlbach.” Cascading Consequences of the Loss of Arctic Sea Ice

I mentioned the extraordinary phenomenon of dust from the Sahara being carried into the Arctic. Check out; Changes in polar jet circulation bring more dust from Sahara Desert to the Arctic

After we were on air Professor McPherson and I joked about Andrew mentioning that “No one wants to be Casandra”, ain’t that the truth ! Guy and I laughed about the fact that we don’t want to be ‘Cassandra’s’ but we see it as a duty to both the youth and all the other species we take down with us to honestly confront the predicament we find ourselves in.
This is the article written by Dr Glikson for the Arctic News Blog; Accelerated global warming and stadial cooling events: IPCC oversights regarding future climate trends

We discussed the threat of methane eruptions in the Arctic which I have covered previously on this blog. Check out all the links in the comments section; Bubble, Bubble, GigaTons of Methane Trouble and the lack of urgency from the IPCC

An excerpt from Dr Glikson’s The Event Horizon Homo Prometheus and the Climate Catastrophe
“With the advent of global warming and the nuclear arms race, humans are rapidly approaching a moment of truth. Technologically supreme, they manifest their dreams and nightmares in the real world through science, art, adventures and brutal wars, a paradox symbolized by a candle lighting the dark yet burning away to extinction, as discussed in this book. As these lines are being written, fires are burning on several continents, the Earth’s ice sheets are melting and the oceans are rising, threatening to flood the planet’s coastal zones and river valleys, where civilization arose and humans live and grow food.  With the exception of birds like hawks, black kites and fire raptors, humans are the only life form utilizing fire, creating developments they can hardly control. For more than a million years, gathered around campfires during the long nights, mesmerized by the flickering life-like dance of the flames, prehistoric humans acquired imagination, a yearning for omnipotence, premonitions of death, cravings for immortality and conceiving the supernatural. Humans live in realms of perceptions, dreams, myths and legends, in denial of critical facts, waking up for a brief moment to witness a world that is as beautiful as it is cruel. Existentialist philosophy offers a way of coping with the unthinkable. Looking into the future produces fear, an instinctive response that can obsess the human mind and create a conflict between the intuitive reptilian brain and the growing neocortex, with dire consequences. As contrasted with Stapledon’s Last and first Man, where an advanced human species mourns the fate of the Earth, Homo sapiens continues to transfer every extractable molecule of carbon from the Earth to the atmosphere, the lungs of the biosphere, ensuring the demise of the planetary life support system.”
“In Greek mythology, the Titan Prometheus had a reputation as being something of a clever trickster and he famously gave the human race the gift of fire and the skill of metalwork, an action for which he was punished by Zeus, who ensured everyday that an eagle ate the liver of the Titan as he was helplessly chained to a rock.” Prometheus

Homo Prometheus and the Climate Catastrophe 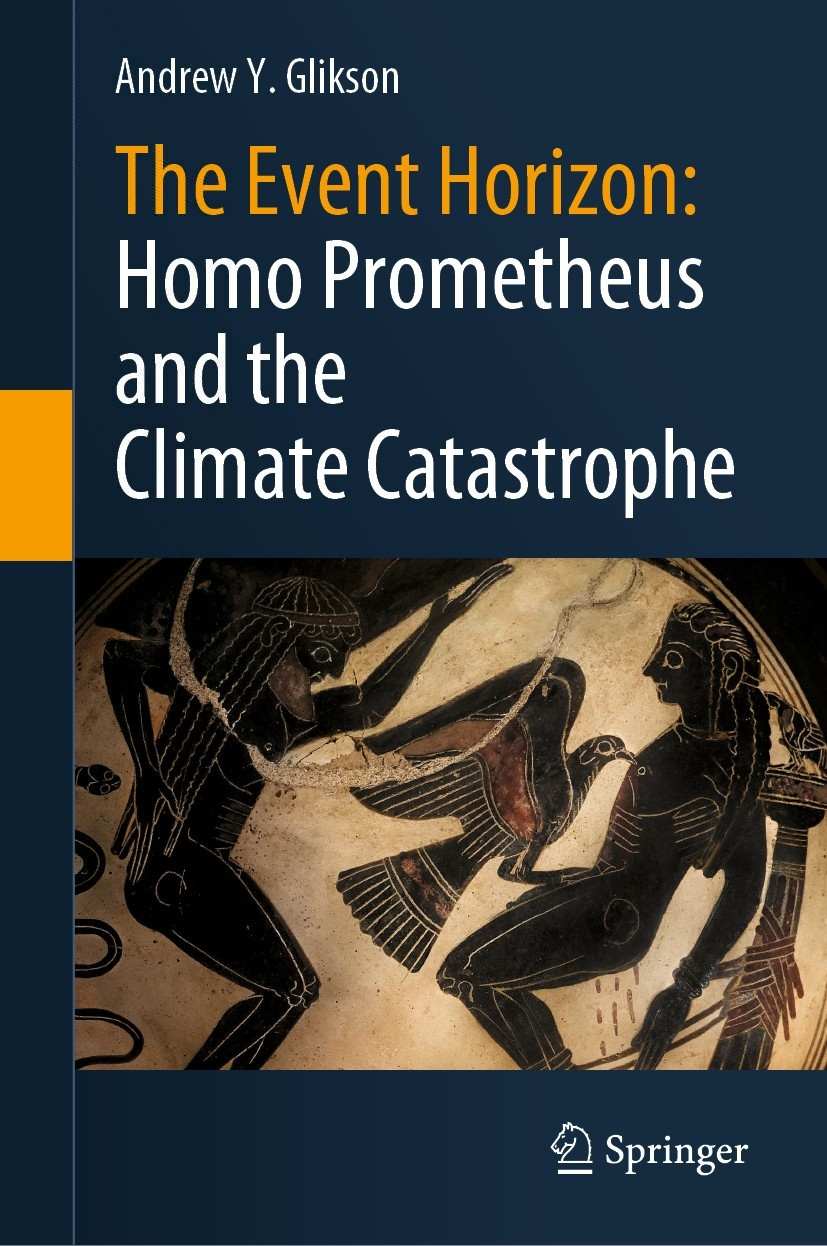 My ‘Antidote to despair’ is to volunteer at the Rakino Island Nursery on a rewilding project. Dr Glikson’s is to write poetry. Links to his poetry and his previous interviews are embedded here; Tipping Points in the Earth Climate System. Dr Andrew Glikson returns to Nature Bats Last

5 comments on “The Event Horizon; Homo Prometheus and the Climate Catastrophe”