Home › Resistance › The Day I out-ran the Israeli Defense Forces.

The Day I out-ran the Israeli Defense Forces.

In 1981 I was backpacking through South East Asia when I found myself on Freak Street in Kathmandu, Nepal also known as Jhhonchen tole.

I was staying in a $1/night back packers with a group of Kiwi friends.
In those days the electricity supply in Kathmandu was very erratic and came and went without warning, many times every day. If you wanted to have a hot shower you had to que for your turn at the communal bathroom, when the power was on. No electricity, no hot shower. If the power went off you had to decide to wait in the que until it came back on or go away and que again later.

I was in the que when a group of young Israeli’s from the Israeli Defense Force walked up to the door and took control of access into the bathroom.We were arrogantly told we’d have to wait until they were finished because they had just arrived on leave after being on patrol in the occupied territories in Palestine. and they had priority at the showers.

The people in the que began to complain and all of the soldiers became angry and argumentative. It was all about their (God given) rights and we had none.

After a few moments of heated discussion I triggered a thermo-nuclear response by foolishly spouting “Sometimes I think that the only thing Hitler taught you people was how to behave like fascists.” One of the soldiers turned purple, veins bulging in his neck and temples and charged at me. When I played rugby ( poorly) my position was half-back, one of the skills any half-back develops is the ability to avoid large opponents diving on you.The bigger they are, the harder they fall, on you!
I managed to avoid the assailant and ran for the exit hearing behind me a brawl breaking out and the screams of men and women from the que. Mea Culpa.

Down the stairs and out the door I scarpered and next minute I’m sprinting down Freak Street in rugby shorts a singlet and bare feet. No wallet, shoes, passport or money with members of the IDF in hot pursuit. I think it is fair to say I am lucky they weren’t armed.
I ran and ran and ran like Forrest Gump, with a posse from the IDF close behind. I had just returned from tramping in the Annapuna ranges where I had been treking at over 2000m in elevation. One of the things that happens when you have been at altitude is your blood becomes highly oxygenated and when you come down to lower levels you feel very fit and have hightened stamina. Added to the situation was the fact that I felt that I was running for my life. I suspect the altitude training may well have saved my life or at least a brutal beating.
Through markets, narrow streets and busy footpaths I sprinted with the IDF in hot pursuit. This went on for a few hours with me ducking and diving, slowing down to catch my breath and looking over my shoulder and in front of me expecting an ambush at any moment.

After a few hours of running, ducking and diving, I found that I had outrun the IDF. Now I had to decide what to do next. I knew I couldn’t just return to the hotel but we did have a local cafe where we as a group had eaten, so I cautiously made my way back there.
When I arrived at the cafe, low and behold there were my erstwhile friends, some with visible wounds.
After I had scarpered, the soldiers had beaten all the people who had remained. It was my first  personal experience of collective punishment. My battered and bruised friends described the brawl as viscious with the soldiers applying all their training.
As you can imagine my friends were furious with me for starting a conflagration which left some of them battered and bruised and all of them on the street because it was made clear to them by the soldiers that they had to leave the hotel.
Fortunately for me, my friends had packed my bags,wallet and passport and had not abandoned me.

What this behaviour did to this 21 yr old was make him a life long supporter of Palestine and her people and challenged me to confront Zionism at ever opportunity. In both of the conflict zones I have lived in, draconian and reactionary totalatarian behaviour created more resistance, it never quelled it.

Collective Punishment;
The people of Palestine are always subjected to collective punishment. One person fires an ineffectual missile out of Gaza and the entire community are collectively punished, this is a war crime.
It is quite possible and even highly likely that many of those rocket attacks are false flags being hoisted by a fifth column in Gaza deliberately triggering a response from the apartheid state.

When I was in my mid twenties some 5 years later I arrived in Republican West Belfast in the occupied 6 counties of Ireland. Alongside amazing murals of our struggle I was proud to see beautiful murals supporting Palestine. Check out the work of my comrades at Gael Force Art for numerous examples.

I was always challenged when considering the issue of the armed struggle in Palestine, South and Central America, Africa generally and in my parents and ancestors country of Ireland.
The amazing woman below Patsy Marron convinced me that it wasn’t our choice because our community was under occupation and armed attack and we had a duty to defend our communities. The people of Palestine have exactly the same rights and duties.
In the photo below Patsy who is over 90 yrs old, was at a demo in her native West Belfast recently. Rock that! 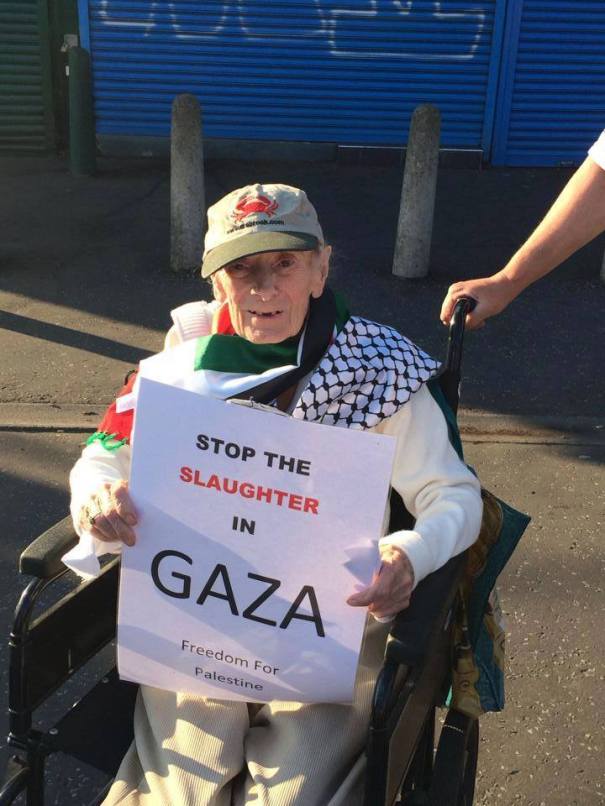 Anyone who follows this blog ( hit the subscribe button) will know that I believe that we are in the early stages of runaway global warming leading to the collapse of industrial civilisation and the extinction of most if not all complex life on this belleagured planet.
Never underestimate the damage all of this imperialist and colonial warmongering has inflicted on the biosphere.
If your an environmentalist and not an anti-imperialist you’ve missed one of the major drivers of the sixth great extinction.

If I could have one wish before collapse unfolds it would be to see a sign like the one below in Aotearoa New Zealand. We kicked the Israeli ambassador out of Aotearoa once before, let’s do it again.
I took this photo in Harare in 1991 hence the poor resolution but it’s the message that counts.
It’s way past time to end the never ending nakba.
Irish Solidarity with Palestine 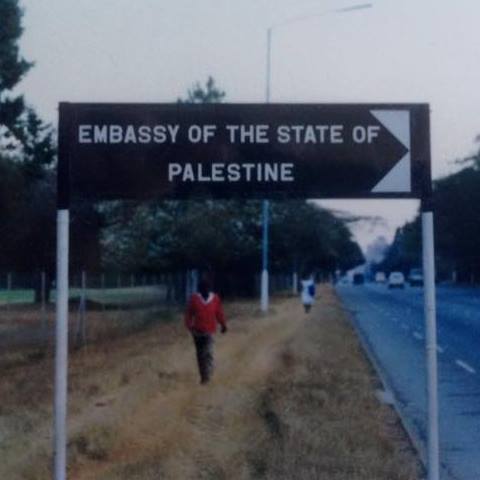 13 comments on “The Day I out-ran the Israeli Defense Forces.”