Home › Albert Bartlett › This is the End, Beautiful Friends, The End

This is the End, Beautiful Friends, The End

Do you seriously fucking think we will just ‘bounce back’ from this situation we all find ourselves in?
Forget it. It’s delusional to expect we’ll recover from this ‘event’. Paradigm shifts are like tipping points in the climate system. You can only see them in the rear view mirror and most of them are irreversible.
There was a strong school of thought that we were facing the early stages of collapse before this “Black Swan” appeared. Last September we interviewed French rocket scientist and systems thinker Arthur Keller on his conclusion and wonderful You Tube presentation “Collapse, The Only Realistic Scenario”     The collapse Arthur foresaw is unfolding as we speak and dutifully ‘self-isolate’.
I’ve just entered my 6th decade on this planet. What we are witnessing is unprecedented in all human history. Never before in history have the emperors told the serfs to “stay home and we’ll pay you.”
No one. Absolutely no one is in control and no one has ever been here before. Think of the mediocrity we have ‘leading us’ as this predicament unfolds. If you think Boris and Donald are going to lead us out of this mess you have rocks in your head.
I was three years old when a magic bullet entered the back of President Kennedys head and blew his brains out in the same direction the bullet entered ! Miraculous it was, apparently. Murder Most Foul
The last vestiges of fake democracy in that country were finally extinguished with that ‘magic bullet’ and to this day the dominant culture has instilled such an extreme version of ‘Stockholm Syndrome’ in people ensuring that it is ‘normal’ to accept the impossible and you’re a conspiracy theorist to point out the bleedingly obvious deception. Go along with the charade if you wish but I won’t play that game. No one can convince me that infinite growth on a finite planet is sustainable. Our chickens have come home to roost. Lock, stock and two smoking barrels.

As I grew up, I heard my parents denouncing the Vietnam war, I’ve seen war myself in Mozambique and the occupied six counties of Ireland. I know what it smells like. I’ve seen the destruction and the psychological damage done to those communities. Remember, “No soldier returns from war uninjured”.
During my entire lifetime, imperialist capitalism has been raping and pillaging the planet, wiping out indigenous cultures every where it goes and grinding the natural world into dust. Of course it has a fucking end point. The unsustainable can’t be sustained forever. Everywhere has been raped and plundered. There are no far off undiscovered lands left to be exploited. All the low hanging fruit has been plucked, we’re circling the drain. This is what the end game looks like.
Organised, psychopathic, Armani clad gangsters have been gaming the system all my life and now they have lost control like all junkies eventually do.
Why the fuck are you all acting surprised?
Never before have I seen governments telling their people to “stay home and we’ll post you a cheque.”  All of a sudden they have magical money, like the bullet we discussed earlier, that they have just plucked from the sky and they are raining it down on the banksters in the trillions and on the ‘self-isolated’ in the thousands. Notice a recurring theme here? Money for nothing and the chicks for free.Cognitive dissonance reins supreme.

When governments all around the world are giving away money you know that they have lost total control. Becareful, you could be killed by helicopter money. 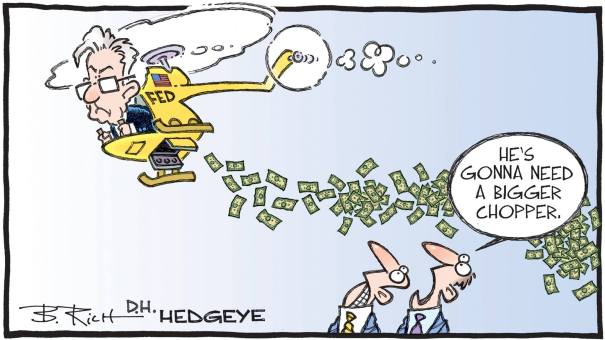 Let’s have a think about what this ‘timely’ virus has achieved.
Contemporaneous with the outbreak of the virus the global economy was on life support. The US Fed’ has been pumping trillions of brand new dollars into the system to try and keep the ponzi scheme going and it staggered along until the game changing ‘Self Isolation’ took effect. Never before has a populace been so effectively corralled. The protests in France extinguished overnight. Protests around the world wiped out completely as Palestine, Syria, Iraq, Yemen and Afghanistan continue to be bombed into the dark ages as the military industrial complex bank the contemporaneous profits as the weapons are used and orders placed for more. Iran, Venezuela, Cuba, Russia and China all sanctioned for not kowtowing to the “Empire of Chaos”.
The independent states listed above have been moving to de-dollarize their economies. They started to trade oil in anything but the greenback. Before this ‘event’ the dollar was teetering on the brink of collapse and then out of the blue, a distraction.
The monsters murdered Muammar  Gadaffi because of his plan to create a gold backed dinah to trade oil in and his unflinching support for the African Union. The next distraction will be war against the independent states, it’s what funds Wall Street.

In his novel “The Sun Also Rises” Hemingway describes how the end comes about when you lose everything. One character asks;”How did it happen”, the other responds “Gradually and then suddenly”. Ring any fucking bells?

I’ve been closely following the progression of the virus around the planet and thanks to Albert Bartlett I am aware of the danger of the exponential function. This virus will probably eventually infect us all as the rate of infections is now exponential and governmental responses have always been too little, too late ensuring it’s spread. Remember it’s always the economy first, the inhabitants last.
Health systems worldwide are collapsing at the beginning of the catastrophe which has many months or years to run. Our complex system of ‘On demand’ supply networks depend on Business As Usual to maintain the flow of everything we take for granted being available and as you may have noticed BAU shut down recently. Already some nations are banning grain and other food exports.
I simply cannot see how Western culture can continue as millions of people start dropping dead around us and the entire human population of the planet are living, eating, drinking and working in fear. This soulless system isn’t designed to survive these dynamics. Nor are the fragile humans caught up in the maelstrom.
I’m not ‘Fearmongering,’ I’m laying out what I see before me without the manic attachment to sugar coating our predicament that this culture has incubated. Unsupported ‘positivity’ is delusion, I’m more inclined to hope for the best and plan for the worst.
To quote Joanna Macy from her essay “The Greatest Danger”;
“Because of social taboos, despair at the state of our world and fear for our future are rarely acknowledged. The suppression of despair, like that of any deep recurring response, contributes to the numbing of the psyche. Expressions of anguish or outrage are muted, deadened as if a nerve had been cut. This refusal to feel impoverishes our emotional and sensory life. Flowers are dimmer and less fragrant, our loves less ecstatic. We create diversions for ourselves as individuals and as nations, in the fights we pick, the aims we pursue, and the stuff we buy.”
Convert whatever resources you have into food asap. There is zero guarantee that this set of living arrangements will hold together much longer considering the threats we know it is under with the next ‘Black Swan’ hovering in the wings about to appear.

If this event hasn’t already tipped us over, either the next one or the one after will. They will continue to appear thick and fast.

On that note, I’ll get back to early stage runaway abrupt climate change. Remember that other, non-linear existential threat we face?

My co-host on Nature Bats Last and I have been drawing attention to the loss of the Aerosol Masking Effect from the shut downs happening around the planet. Professor McPherson sums up that aspect of the predicament below;

Good luck everyone, the predicament can only be worse than we know.

95 comments on “This is the End, Beautiful Friends, The End”